First, let me give you some background. In preparation for an interview with a potential client, I recently watched my first TED Talk. Though I’d heard of them before, I didn’t fully understand what a TED Talk was until I Googled it. I learned that “TED Talks are influential videos from expert speakers on education, business, science, tech and creativity, with subtitles in 100+ languages.” Put simply, TED Talks are “ideas worth spreading” and were originally intended to focus on Technology, Entertainment and Design, reflecting its Silicon Valley roots. It has spread to include much broader topics since its inception in 1984, and by 2012, TED Talks videos had been watched online by over one billion viewers worldwide, according to Wikipedia. I was intrigued. And I was curious which TED Talks had been viewed most often.

Another quick Google search turned up the 20 most popular talks of all time, including this one by Shawn Achor titled, “The happy secret to better work.” It has been viewed over 13 million times, so I figured there must be some value in it.

Turns out, Shawn Achor had a lot of valuable insights to share on the elusive idea of finding happiness and success at work. He says that many people believe that they’ll be happy once they achieve success at work but contends that “If happiness is on the other side of success, your brain never gets there…we think we have to be successful, then we’ll be happier.” He shows us how achieving happiness first and becoming more positive in life will allow us to become more productive and successful at work. He says this “happiness advantage” is effective because our brains “at positive work better than at negative, neutral or stressed” and that we become more productive and resilient with less burnout and turnover if we are happy first. The lesson: happiness spurs success.

This message immediately resonated with me because I think we all have the same thought process, “If I just do X, I’ll be happy” or “Once I make $__ a year, then I can relax and be happy.” Shawn Achor’s contention, and I must say I agree, is that it doesn’t have to be this way. In fact, he believes that the happier you are at the start, the more successful you’ll be in the end. It’s not as simple as it seems, I know.

So the real question becomes, “How do we achieve happiness?”

Follow these exercises from @shawnachor to achieve happiness in work and life:

Lucky for us, Achor has a solution for that, too. He says that if you do the following exercises each day for 21 days, you will ultimately work “more optimistically and successfully.” I was curious enough to accept his challenge.

The truth is, I never felt “unhappy” at work or in life before taking Achor’s challenge. But afterwards, I do feel a sense of clarity and focus that I didn’t have before. I appreciate the small things, those little gratitudes, and I grant myself time to exercise and take a meditative break in the spirit of “becoming happier.” I’d say it was a successful outcome for me, and I’d encourage you to experience Achor’s 21-day challenge as well.

Have you seen any TED Talks that have had an impact on your life and career? If so, please let us know about them!

Latest posts by Rebekah Corr (see all)
← 3 Nifty Apps To Save You Precious Time
Mommy Hacks: Working From Home With Little Ones → 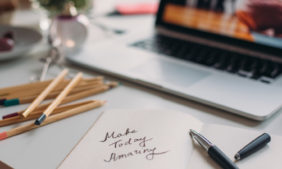