It didn’t go exactly how I pictured it. My first client, “Bill,” and I talked for about 45 minutes during our interview. He wanted to know about my Project Management background, about challenges I faced in my previous job, about my long-term VA goals.  I wanted to know what he needed most from a VA, what obstacles I might have getting started, and his long-term needs. We talked briefly about how we’d communicate (phone vs. email), how often we’d talk (daily emails, once-a-week phone calls), and what my role and responsibilities would be. In a nutshell, I was a Project Manager for a web-based restaurant software company. Where I used to arrange photo shoots and help launch websites, now I would be building schedules for client implementations. It wasn’t quite as glamourous, but I was excited nonetheless.

It had never occurred to me, particularly after all of my preparation, that my new state-of-the-art Mac desktop wouldn’t talk to his PC. Bill preferred to use Outlook, rather than Gmail, because it interfaced better with Google Drive, but somehow it just didn’t work with my Mac when the rest of the team was using PCs. How could this be? Bill was quite knowledgeable in this area, actually. We spent hours on the phone, troubleshooting, to no avail. What I did learn during those lengthy calls, though, was that Bill was extremely smart, patient, a good communicator, and a genuinely nice guy. In short, Bill was someone I wanted to work with.

I don’t think anyone would have blamed me if I cited “technical difficulties” as a reason to pull the plug on my partnership with Bill. After all, we had given it a good shot, and it just wasn’t working. Weeks had gone by, and no progress had been made. The only thing left to do was to either move on or buy a PC.

I spent quite a bit of time contemplating this. And in the end, I decided that I liked Bill and saw potential in a long-term VA position with him. I also knew that owning and being proficient with both a PC and a Mac would only make me more skilled and versatile for future VA opportunities. It seemed like a good investment.

And so far, I think it was. I bought the PC, and Bill had me connected to his network and fully-functioning in no time. Aside from a few small hiccups here and there, the technical issues seem to have subsided. And because I now have an array of clients, I tend to use my computers for different tasks. My laptop is handy for on-the-go projects; my desktop is better suited for more creative projects. A picture-perfect ending, as far as I’m concerned.

Have you encountered technical difficulties, too? If so, we’d love to know how you handled the situation. Share your wisdom with us!

Latest posts by Rebekah Corr (see all)
← VA Tools In The Spotlight: Passpack
How I Changed My Commute From 30 Minutes To 30 Seconds → 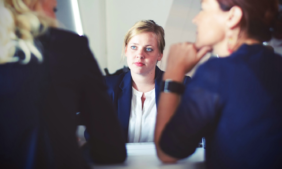